The P-520 is garnering interst from many organizations and individuals. Keep up with the latest news about the boat. 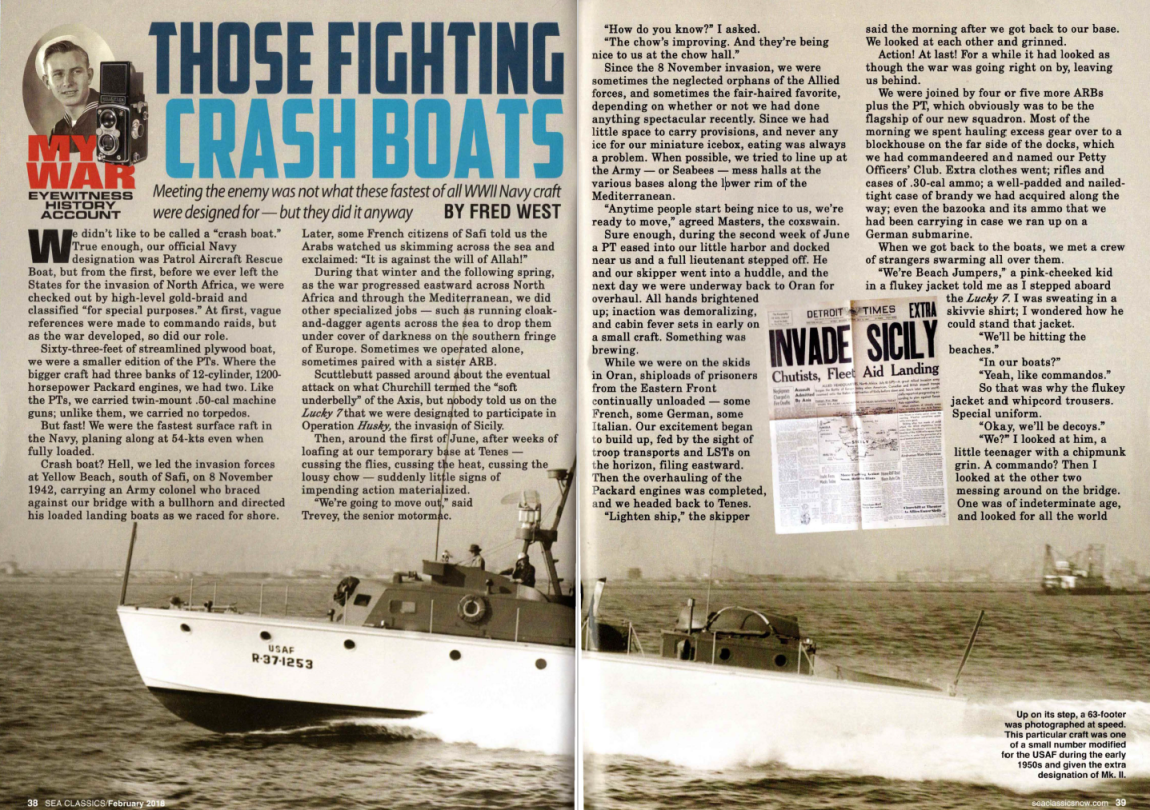 We didn't like to be called a "crash boat." True enough, our official Navy designation was Patrol Aircraft Rescue Boat, but from the first, before we ever left the States for the invasion of North Africa, we were checked out by high-level gold-braid and classified "for special purposes." At first, vague references were made to commando raids, but as the war developed, so did our role. Sixty-three-feet of streamlined plywood boat, we were a smaller edition of the PTs. Where the bigger craft had three banks of 12-cylinder, 1200-horsepower Packard engines, we had two. Like the PTs, we carried twin-mount .50-cal machine guns; unlike them, we carried no torpedos. But fast! We were the fastest surface raft in the Navy, planing along at 54-kts even when fully loaded...

CLICK HERE TO READ A PDF OF THE ARTICLE 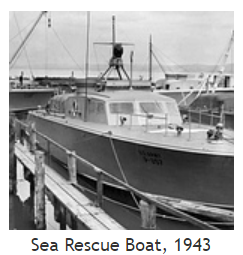 Long-time Palisadian Bill Knudson started working at Petersen’s Boatyard in the summer of 1941 as a carpenter. The boatyard, at the foot of Van Houten Street on the Hudson River in Upper Nyack, is one of the oldest on the Eastern seaboard dating back to 1787.

Originally known as “Tallman’s Dock” for Abraham Tallman who purchased the riverfront plot in 1793, it saw the building of schooners, paddle-wheel steamers and pleasure craft through the 1800s. During World War I the shipyard built submarine chasers. Following the war, the boatyard specialized in yacht building until the 1929 depression.

Julius Petersen who owned a small yard at the foot of Burd Street acquired the yard around this time. In early 1941, with the Second World War imminent, Petersen received government contracts to build two 110- foot wooden-hulled sub chasers. The yard would go on to produce about ten sub chasers and over forty 85-foot airsea rescue boats during WWII. Bill remembers this busy time. There were more than 300 men employed there with an office set up by the Navy. It was a seven-day a week operation. All the hulls were hand-framed; patterns and templates were shaped in the yard’s three-story mold loft. Workmen laid out whole ships on the floor of the loft from blueprints. At one point, Bill won a lottery among the workers to choose a sponsor for a sub chaser. He chose his mother, Anna Knudson, to christen U.S.S. P.C. 1315.

After a deferment for shipbuilding, Bill was drafted in 1943. He joined the Merchant Marines and within two weeks he was on a Liberty ship taking troops to North Africa as part of a convoy of almost 80 ships. He continued with the Merchant Marines as ship’s carpenter and got to see quite a bit of the world until 1950. Shipping was slowing down at that time so Bill resumed his job at Petersen’s. They had stopped building boats by this time, but remained active as a storage and repair marina, in part due to their large travel-lift and sheds for indoor storage space for boats. 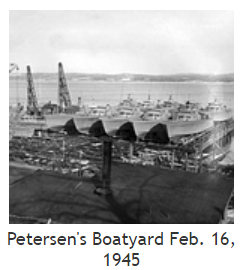 Around WWII, Julius Petersen’s son Arthur assumed ownership upon the death of his father. He then sold the boatyard to partners Craig Carle, Bill Gould, Stanley Sargeant and Joe Rasso. Craig Carle ended up buying the others out and when he died in the early 90s his grandsons Tom and Jeff Benneville, inherited the yard.

By the time Bill rejoined Petersen’s he was not only a carpenter, but an electrician and a plumber as well because, as he puts it, “you need to know everything when you’re working on a boat.” Bill worked regularly at the yard until the mid 1990s, occasionally working there afterwards as an outside contractor.

A large store on the site sold boating equipment; it has been torn down along with a number of buildings. While Petersen’s is still a boatyard, its future is in doubt. The owners have applied to the Village of Upper Nyack to change the zoning from water-dependent business to residential and have stated their intentions to build townhouses on the property.

Watch an interview with Ted Yadlowsky.

CAMBRIDGE, Md. – Sailwinds Park in Cambridge received a historic visit from the P-520, a crash boat used in World War II. “We want to make this vessel the p-520 sort of Cambridge’s ambassador to promote Cambridge,” says Ted Yadlowsky, a consultant with the Veterans Heritage Foundation.

The boat’s arrival marked the start of a tribute to Brigadier General McGee, from the famous Tuskegee Airmen. Family members of General McGee were a part of the memorial service and received a flag from the boat. “Turning around and handing it to Ivan Magee and seeing the look in her eyes as she looked at me and we were both tearing up,” says Lewis Palmer, President of the Veterans Heritage Foundation.

While Cambridge is well known for its connection to the waters of the Chesapeake Bay, what’s not as well known is the fact that it was the site where many vessels, like the crash boat, were built. “This boat is an example of that living history to tell the crash boat veteran story and we want to include other museums and other groups to tell their story and how they all are interconnected,” says Yadlowsky.

The boat was used to rescue or recover soldiers from the water and in battle during World War II and the Vietnam and Korean wars. “That’s what it was about, was a selfless sacrifice to save a pilot and we thought that is a story to tell,” says Palmer.

While this specific boat spent years in California, she recently found a home on the Chesapeake. “I believe the Chesapeake is the best place for this vessel and to tell this story,” says Yadlowsky. He adds, “We’re hoping to set our foot here and build a museum that’s going to honor our WW2 veterans, Cambridge’s history.”

Organizers say there’s much more to be learned from here. “I think we can have something that Cambridge can be very proud of the Delmarva peninsula can be proud of and they can stand behind it in having the support of that,” adds, Yadlowsky.

Organizers say plans are in the words to convert Sailwinds Park into a War Museum which would include the boat as well. They say while the ultimate decision is up to the city of Cambridge, they want to truly showcase all of the rich histories that are there.

Join us on the weekend of April 9-10 at Sailwinds park in Cambridge Maryland to Honor an American hero. Brigadier General McGee, of the famed Tuskegee Airmen, or Red Tails, passed away in January of this year. The P-520 will be hosting a Memorial Ceremony at the park and a wreath laying ceremony on Saturday from 11-1pm. Guest speakers will be on hand to talk about the importance of the Tuskegee Airmen.

Following that service, Living historians from the Airmen`s Preservation Society will be on site teaching the importance of wartime pilots. We will also have military vehicles of all types and other Living history groups set up. Details are being finalized to have a fly over and display of Red Tail warbirds as well.

The P-520 will be open for tours throughout the weekend. Living Historians will be on board to showcase what these boats did during WW2 and the importance of their role to rescue downed pilots.

Sunday will pay tribute to the Doolittle Raiders, the 80 men who took off from the deck of the USS Hornet in 1942 and bombed Japan on what was thought to be a one way trip. This year marks 80 years since that raid happened.

We invite the public out to this important event and to see what we are hoping to bring to Cambridge Maryland. Cambridge built the Crash Boats like ours, your fathers and grandfathers may have worked at the boat yard building these wooden rescue boats. Come out and see history come alive at Sailwinds from 9am-8pm Saturday and Sunday. 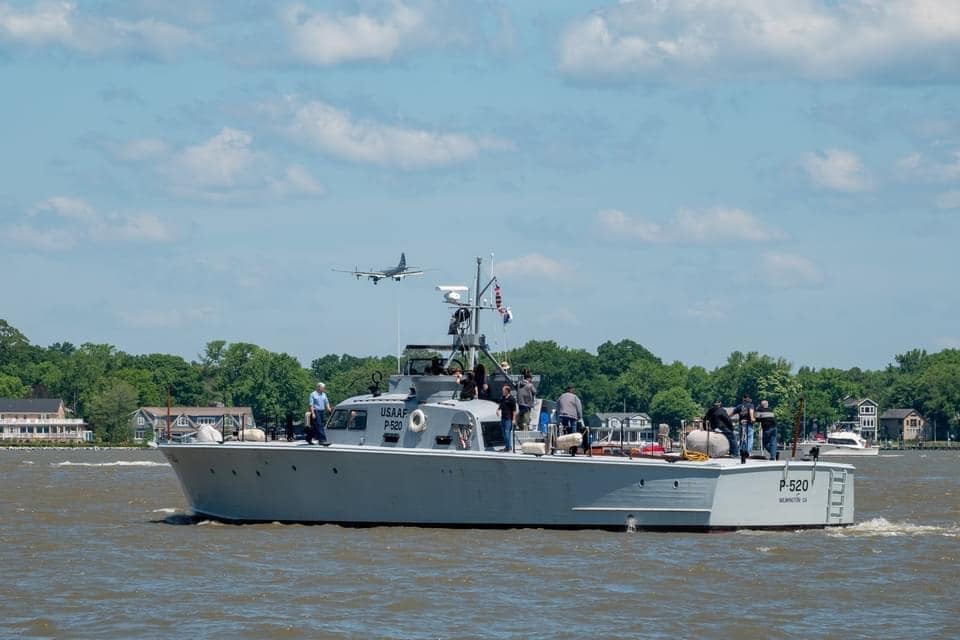 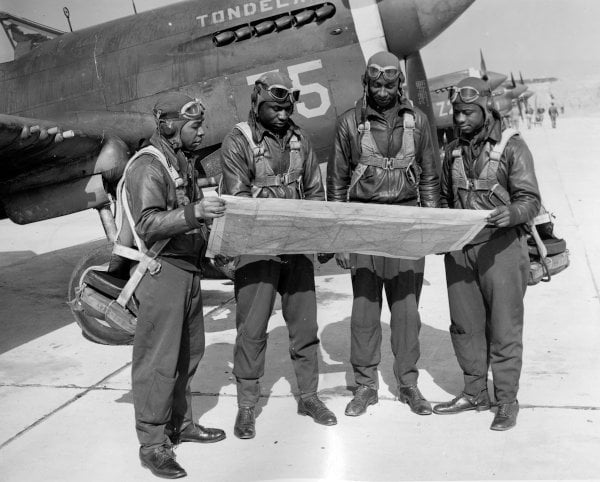 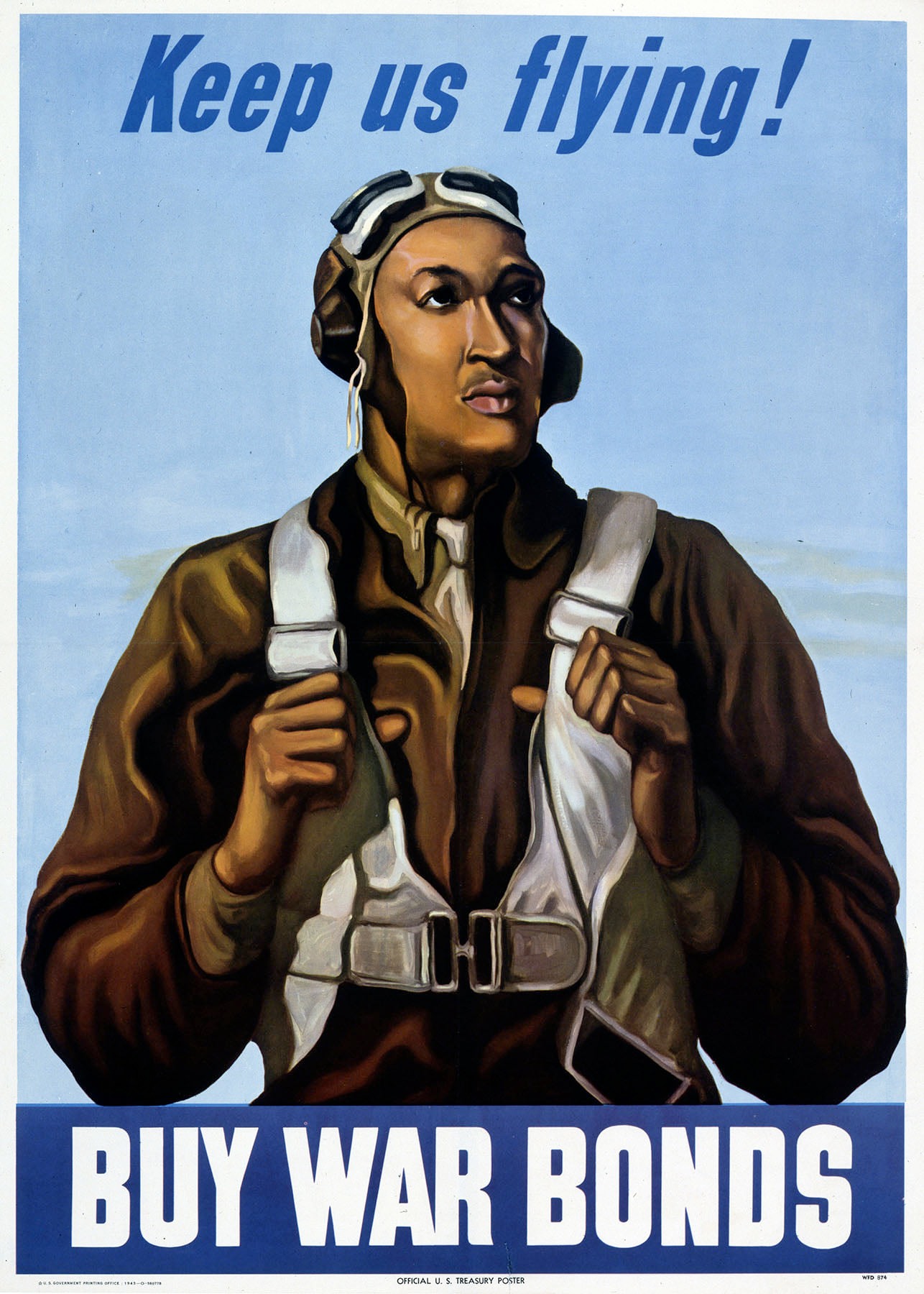 P520 Makes a Trip with a Crash Boat Veteran

P520s last trip of the 2021 season ended in St.Michaels Maryland docked at the Chesapeake bay maritime museum in November. On the trip we had a gentleman join us who's father served aboard the crashboats during WW2 and Korea. It was an emotional trip as Charlie had grown up around these boats and remembered them fondly. Charlie despite fowl weather an rough seas remained on the fly bridge the entire trip. After 4 hours we arrived at the museum mostly without incident our generators fuel pump went bad which was promptly replaced. Once docked we were met by Charlie's wife. Who than had the crew follow to the car where Charlie showed us a model his father had built from memory of a crashboat he served aboard, we were also presented with a copy of the original manual for the 85 foot crashboats to keep aboard the 520. President Lewis Palmer asked Charlie if he would do an honor for the crew and sign our starboard engine supercharger in his father's name. This would be an emotional point on-board. After Charlie disembarked the crew would go on giving tours the entire weekend including a wedding that was taking place Saturday evening on the museum grounds. This would conclude P520s 2021 season before her repair haul out in early 2022. Charlie's father built this large model by hand an memory. It was right down to even having toilets an pipes running in correct areas. 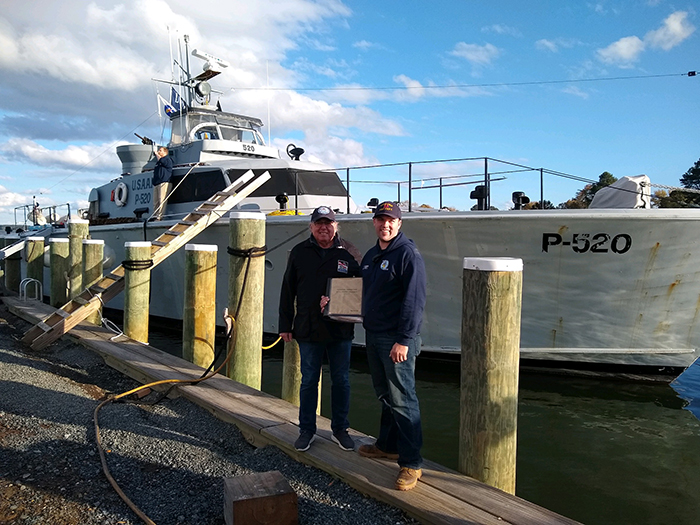 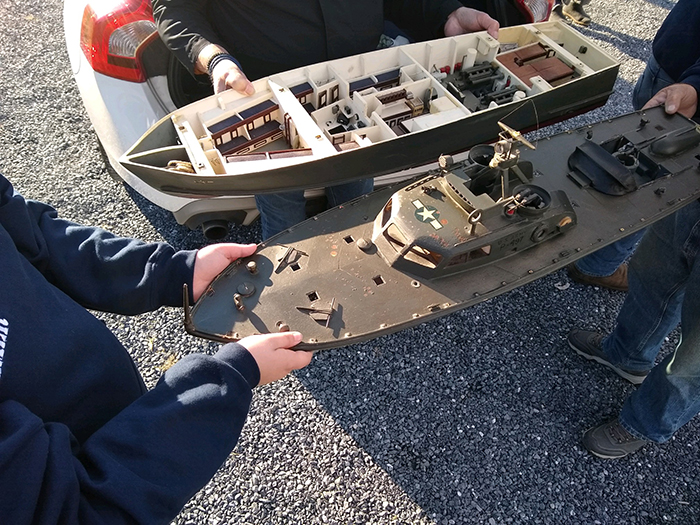 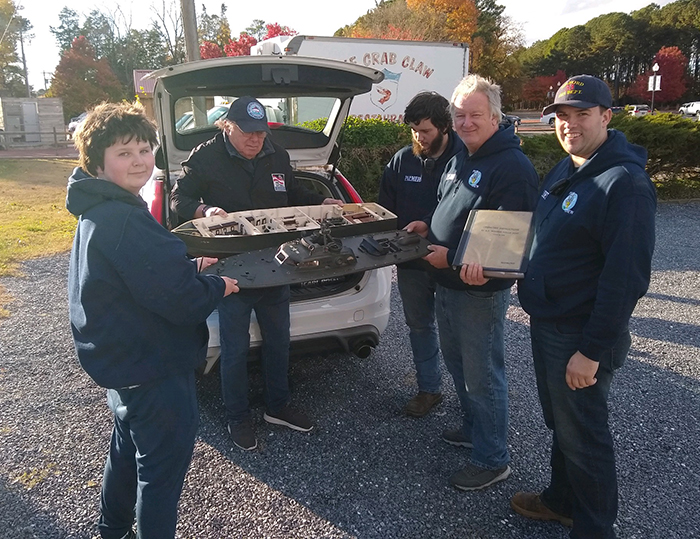 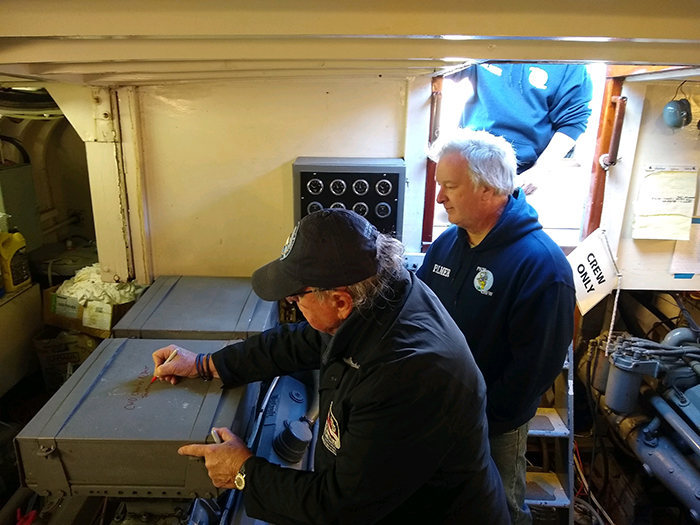 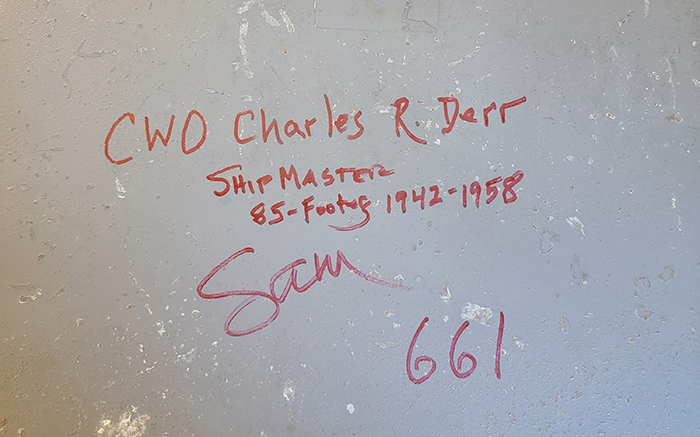 P520 Pulled from the Water for Inspection

The P520 was pulled into dry dock for routine maintenance. 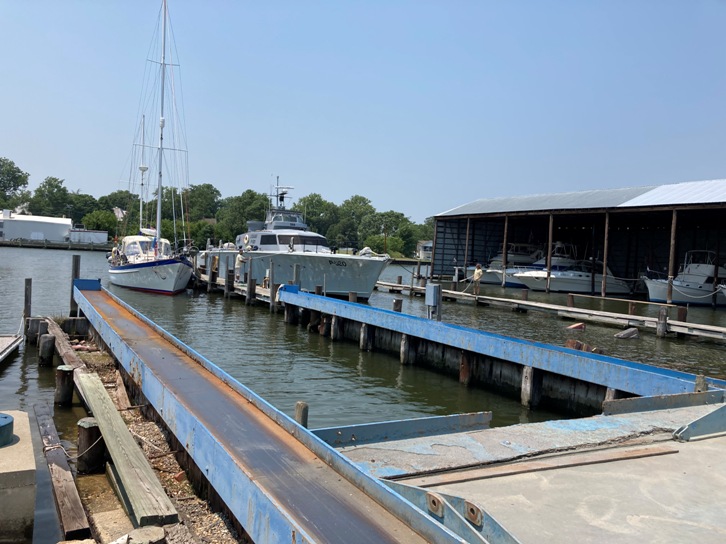 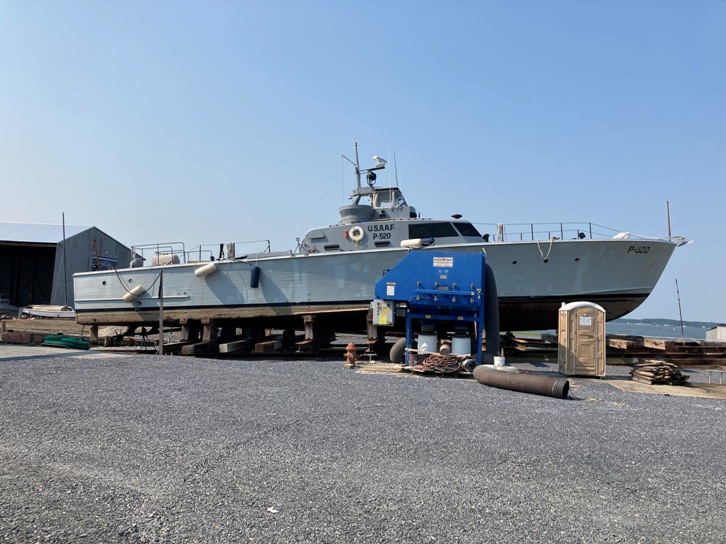 An 85-foot wooden boat with a grim past will soon teach future generations on the Bay about the realities of World War II. The nation’s last operational, historically-correct airplane crash rescue boat is in Cambridge, at the same yard that first built these boats. 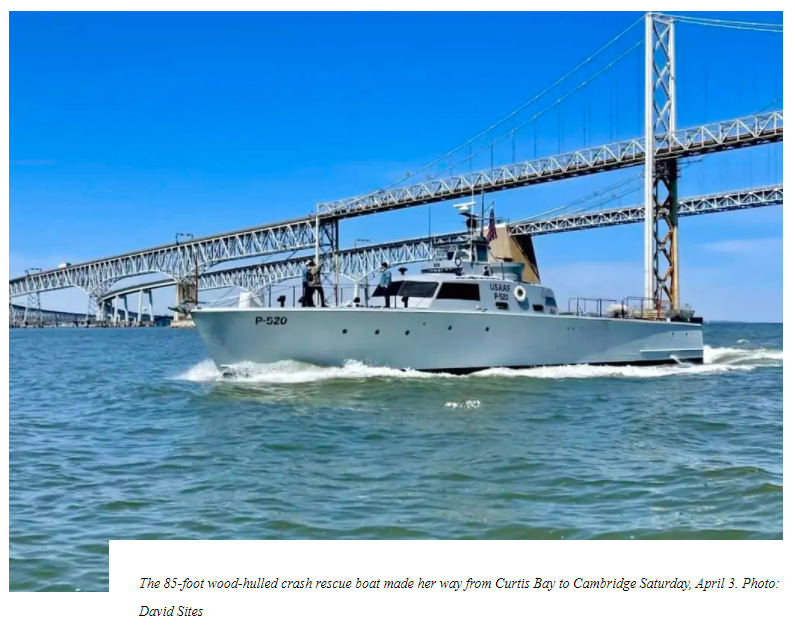 If you were out on the Chesapeake Bay this past Saturday—a brilliant-blue, cool spring day—you may have seen a piece of World War II history traveling from Curtis Bay to Cambridge. The P-520 is an 85-foot, wood-hulled U.S. Army Corps rescue boat used to recover downed pilots during the second World War, built in 1944.

The vessel is the last of its kind, and remarkably, it is fully operational in its original military configuration. Its presence on the Chesapeake is improbable considering the P-520 was restored in California and donated to the Louisville Naval Museum in Louisville, Kentucky, who moved her to West Palm Beach, Florida. The boat then made the trip from West Palm to the Chesapeake, arriving via the C&D Canal. P-520 runs on twin diesel engines, but still has the original Packard M4-2500 motors in storage. 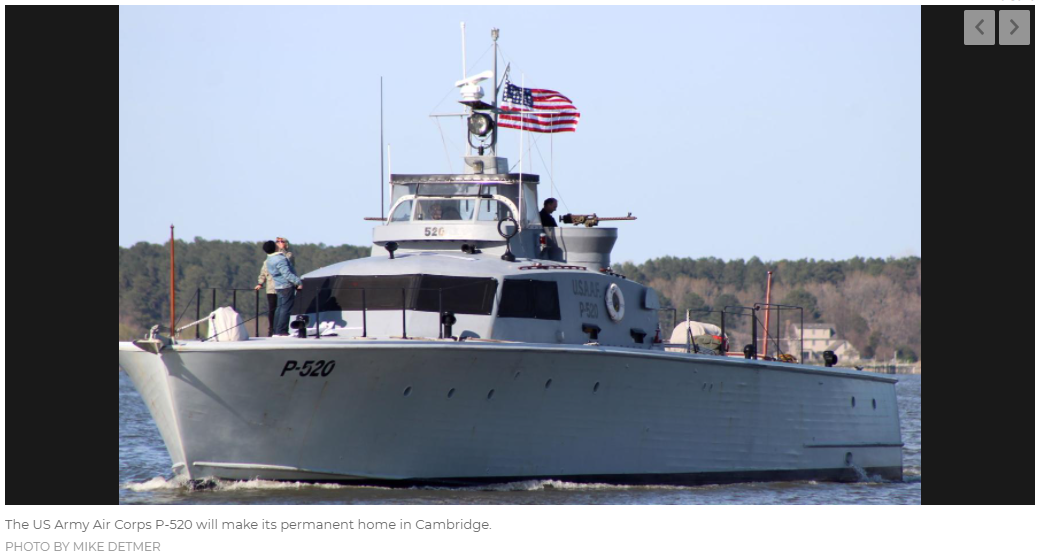 CAMBRIDGE — The last remaining World War II crash rescue boat has made Cambridge its permanent home port, according to a recent statement from the organization dedicated to caring for and promoting the vessel.

The US Army Air Corps P-520 was designed to rescue downed aviators, and came to Cambridge for repairs at Yacht Maintenance in April.

"Cambridge just felt right for all of us considering the history of the town itself as well as the war effort, and building of P520s sisters," said the statement.

The 85-foot vessel was built in 1944 in California, but 14 boats of the same design were made during the war at the same facility where the boat is currently out of the water for repairs.

The P-520 hosted a number of WWII, Korea, and VietNam vets for an honor cruise on Memorial Day 2021. We would like to extend our thanks to Abby Isaacs for her great coverage of the event.

100% of all donations made are used for the P-520. Our museum staff is unpaid and all proceeds to keep the P-520 operating. All donations are tax deductible as we are a 501c3. Donation letters are given upon request.